Upon reflection, I don’t think I know a woman who couldn’t say “Me too.”

The most important women in my life – my mother, my partner and my best friend – could say that without much of a moment’s thought. So could the publishers, editors and reporters I’ve had the good fortune to work with. And so could most female friends and women I have met over the course of 20 years of being a journalist.

All of them could say “me too,” and that’s a problem. Because no woman, anywhere, should ever have to say “me too.”

But they do. They have to because if they don’t speak up, who will?

If you are uncertain what I am talking about because you live under a stone and the last media you ever consumed was Leave It To Beaver, “me too” has become the short, poignant slogan for women over the internet to point out that they too have been the victim of sexual harassment, abuse and assault.

The #Metoo got rolling after a series of revelations about the creepy behaviour of Hollywood bigshot Harvey Weinstein. Again, if you have been dwelling underground like a mole-person, Weinstein has been accused by a growing chorus of actresses of sexually harassing and assaulting them. It was apparently the worst kept secret in Hollywood for years, though only recently exposed by the New Yorker magazine and the New York Times.

Following those articles and subsequent follow up coverage, women everywhere  – likely at their wits end that these sorts of predators exist unopposed for as long as they do – started sharing “Me too” on social media as a way to show the problem isn’t just about one Hollywood producing asking actresses to watch him shower in exchange for career favours. It exists in every sort of workplace you care to imagine. And no matter how enlightened (that’s “woke” for you young folk) we believe we are as a society, it still happens all the time.

In 2017, women still have to navigate a minefield of harassment and because there are men whose evolutionary progress apparently stopped around the time the species developed bipedal locomotion. That is to say there walk among us far too many Drooly McDroolersons who think women exist solely to boost their porcelain egos either through pleasure and abuse. And there are far, far too many men who say nothing about it when they see it happen.

Don’t believe me? Check out your social media feeds right now. Presuming that you follow even a single woman, you will see #Metoo soon enough.

At this point, there is someone reading this column thinking “Well, why don’t women say something sooner?” You can try to deny it, but I am looking at you, fella. I know what you’re thinking.

Here is the thing about sexual abuse and harassment: It usually has nothing to with sex and everything to with power. Someone like Weinstein could literally make or break an actor’s career. So if he harassed a woman, what was she to do? He could very easily blackball her and cripple her career.

Has your boss every done something really awful to you? Pushed some ethical or moral boundary they shouldn’t have? Did you feel free to just confront them or report them? Or did you pause to think “If I complain, will I get fired?” If you understand that math, you understand why women sometimes don’t say anything. We still live in a world where police out-of-hand dismiss claims made by women of sexual crimes. You think the workplace is, by some miracle, is going to be any different than the rest of society?

There is an entire edifice of male behaviour that, at worse, actively promotes the mistreatment of women and, at best, quietly condones it by saying nothing.

Again, don’t believe me? Consider this hypothetical involving a more benign action on the spectrum of wretched that is sexual harassment:

You are on the street standing beside Drooly McDroolerson (for this thought experiment, we’re giving you questionable choices in friends) and a woman you think is attractive walks by. You, being an evolved primate, think “Oh, she is pretty” and go on about your day. But Drooly, who despite all appearances is only one hair away from being a baboon, decides to shout at this woman. Probably some barely intelligible grunt about her legs or buttocks. If she is really lucky, he might even include some manner of description of what he would like to do her.

Now, do you say something? Do you tell Drooly to stop behaving like a sexual predator in training, or do you stay quiet?

Maybe you say nothing because you don’t think it is your business. (This is frighteningly common. Many people knew about Weinstein but said nothing. Even Jane Fonda recently said she stayed quiet about because she didn’t think it was her place to speak up.) Or maybe you think catcalling isn’t that big a deal. After all, it wasn’t like Drooly grabbed her, right?

Except that by verbally attacking her (catcalling is a form of complement in the same way taking a boot to the crotch is a form of exercise) you’ve made her feel unsafe in her own community. And if you didn’t call McDroolerson out on his behaviour, you’ve given him tacit permission to do it again.

The trouble is that Drooly isn’t alone. He isn’t just nut on a street corner barking at parking metres and anyone in a skirt walking by. Drooly works in schools, leads meeting in boardrooms, holds political office, or carries a badge. Drooly is the product of a culture that has for far too long treated women poorly. And while women have and do stand up and speak up for themselves, this is an issue that men have to tackle head-on.

Yes, yes #notallmen and #alllivesmatter or whatever hollow rebuttal you think you have hit upon, Drooly. Shut up. If your reaction to #metoo is #notallmen or some variant of “but I have never abused a woman” you’ve missed the point by a country a mile.

It is not too far-fetched to assume if other men had taken the stories about Weinstein seriously a whole legion of women would not have been abused. He is not some next-level Lex Luthor-esque genius whose deeds are hard to discover. He is just a guy with a little bit of power and an elephant-sized sense of entitlement to do to women whatever he wants to. Far too many men stayed quiet and, in doing so, allowed it to go on happening.

Every woman who is in important in my life has had to deal with harassment at some level or another. It is unfair. It is unnecessary. It is wrong, and it makes my blood boil.

Nothing I have written here is any different than what I have said publicly or privately in the past. I have tried, where and when I have to, to speak up because it is the right thing to do.

All men should. All men have to. Because the abuse of women at the hands of men is not a women’s issue when you get right down to it. It’s a men’s issue. And men need to carry the weight of the solution on our shoulders.

Because no woman should have to say “me too.” 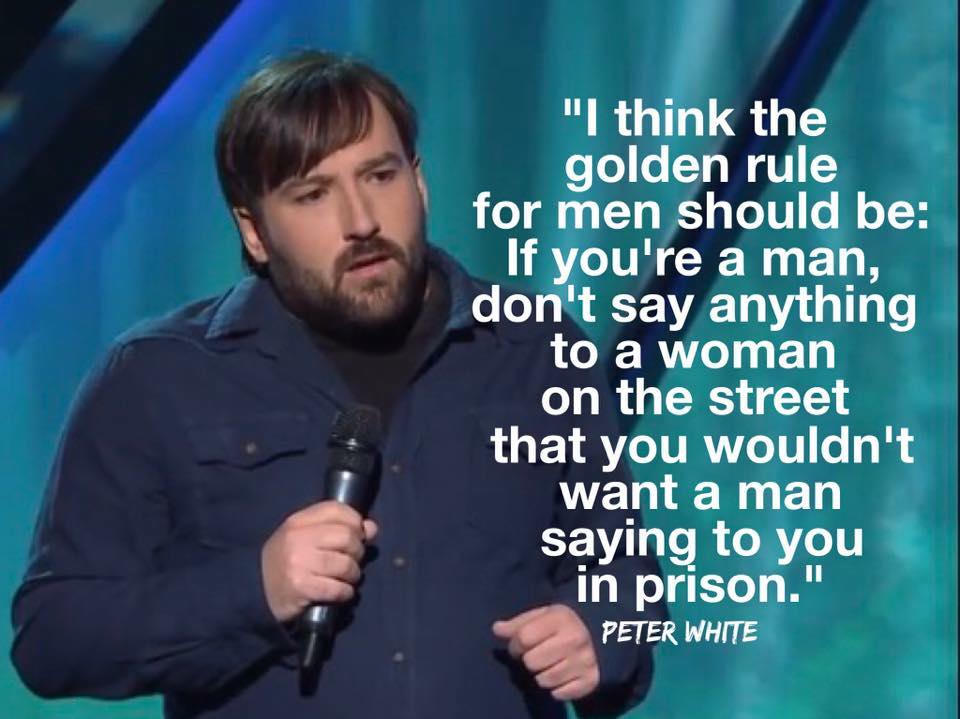